Today we tried this recipe from Just A Taste and it is hands down our favorite slow cooker meal. Why? Because it doesn’t taste like it came from the slow-cooker! It is 80% “set-it-and-forget-it” since the last few steps do require a separate pan. But it’s so worth it. 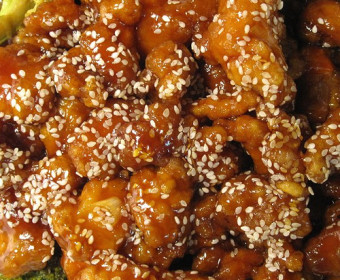 Arrange the chicken breasts in the slow cooker so that they are not overlapping.

In a medium bowl, whisk together the honey, soy sauce, blackberry jam, hoisin, olive oil, garlic, onion and crushed red pepper flakes, and then pour the sauce over the chicken. Cover the slow cooker and cook the chicken on LOW for 4 to 5 hours until the chicken is fully cooked.

Using tongs, remove the chicken from the slow cooker (reserving the liquids) and place it on a cutting board. Remove the bones then use two forks to shred the chicken into smaller pieces. Place the shredded chicken in a large bowl.

In a small bowl, whisk together the cornstarch with 3 tablespoons of cold water to make a slurry.

Transfer the liquids from the slow cooker into a small saucepan set over medium-high heat and whisk in the slurry. Bring the sauce to a boil and cook it until it reduces and has thickened slightly, about 3 minutes. Pour enough sauce over the chicken to cover (you won’t use all of it), tossing to combine. Serve the chicken topped with sliced scallions and sesame seeds.

NOTES:
Depending on the kind of chicken you get, you’ll end up with a LOT of sauce. You only need to use a little to cover the chicken as much as you want. You can use the remaining sauce later to marinade shrimp or salmon OR as dipping sauce for any other dish.