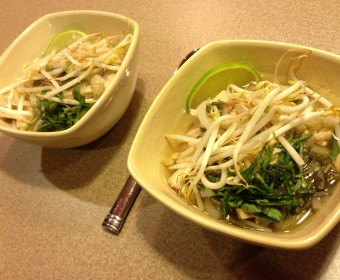 A squeeze of lime just before eating tastes amazing.

Pho is a classic Vietnamese street food, much the same way Pad Thai is to Thai cuisine or fried rice is to Chinese cuisine. This dish calls for some ingredients that you may not use for any other recipe, so we’ve included some substitutions. Also – the recipe instructs you to add a lot of whole spices to simmer for hours, then remove at the end. Using a slotted spoon works best. The following recipe does make a lot of pho – which can be frozen and reheated wonderfully on cold winter days. This is almost like the Vietnamese version of chicken noodle soup, but the fresh herbs and squeeze of lime just before serving takes it to a new level.

Pho is naturally gluten-free if you use rice noodles (be sure to check the box). You can make this vegetarian/vegan by removing the chicken, using vegetable broth, and replacing the fish sauce with soy sauce. Adapted from Slow-Cooker Chicken Pho recipe on EatingWell.com.

*Use organic ingredients wherever possible.